"The default audio track and subtitle of one of my purchased movies are in French, how can I convert the iTunes movie to MP4 format with the single English track? So that I can watch it in default English subtitles and audio tracks every time? " TunesKit support team received a feedback from one of their users in the older version 2.0.3. As the most professional R&D team, TunesKit makes a fast response immediately and soon release the new version 2.1.0 which allows users to choose the output audio track, subtitles and AC3 5.1 audio track or stereo track for the output MP4 video.

"We are always doing our best to make our products better and more easy-to-use. All our customers are our valuable resource. We will take consideration of all suggestions and feedbacks from them." TunesKit CEO Lee said.

And it really did as the CEO said. Since the TunesKit's release on July, 14, TunesKit has made several updates for its featured product – TunesKit for Mac. Here is a list for its major updates:

* Version 2.0.1: Fix the problem of no delivering video tracks on some certain computers;

* Version 2.0.3: Fix the AC3 5.1 audio track problem and the failed conversion of some movies containing punctuations in the movie name;

After all these updates, TunesKit for Mac is the most stable and powerful iTunes DRM Removal tool on the market.

What TunesKit for Mac does for iTunes movie lovers?

TunesKit for Mac is highly recommended iTunes DRM Remover tool for Mac users who loves to buy or rent movies/TV shows from iTunes. With this powerful DRM removal application, you can easily get rid of the iTunes DRM protection from all iTunes M4V videos and convert M4V to unprotected MP4 with fast speed and lossless quality.

By now, with TunesKit 2.1.0, you can preset the video tracks, audio tracks and subtitles before the M4V to MP4 conversion. This function is valuable for people who want to watch the movie with their native language only. TunesKit for Mac 2.1.0 will help users discard all other languages in the MP4 videos.

As the older version, TunesKit iTunes DRM Media Converter 2.1.0 still works on Mac OS X 10.8 or later and the newest iTunes. For older users who have downloaded the previous version 2.0.3, you can click "Check updates" option under the "Help" menu.

Click "Add Files" option, then you can add the M4V video to tuneskit directly from iTunes library.

Highlight the movie you want to set, then click the "Settings" icon, check the subtitles, audio tracks and video tracks, 5.1 or stereo audio track for output. 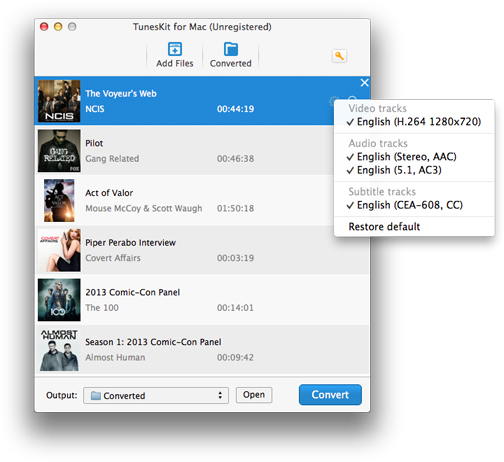 Click "Convert" button to start converting iTunes DRM M4V to DRM free MP4 format. After conversion done, play the converted MP4 video with iTunes or VLC player, you will find there is preset audio tracks and subtitles kept only.